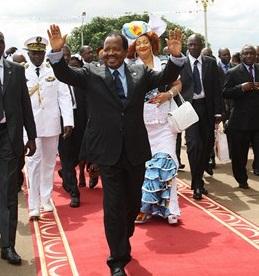 My dear comrades,  We will be commemorating the 30th anniversary of our great national party on March 24.

Thirty years is the age of maturity, the age at which wisdom begins, despite lingering youthful vigour and enthusiasm. Above all, it is the age at which everything seems possible and the strong desire to take initiatives overrides excessive caution or foreseeable obstacles.

In this regard, I am happy to note that the CPDM has stood the test of time and weathered the challenges our country has faced. It remains the bedrock of our national unity, our democratic aspirations and our economic and social progress.

However, let us make a brief retrospective review. What was our country’s situation at the dawn of 1985? We had succeeded in emerging from a crisis which had rocked our society and institutions. Nonetheless, we all felt the need for far-reaching changes.

This aspiration was the forerunner of the Cameroon People’s Democratic Movement or CPDM. In this association of words, attention should be focused on “movement and democratic”.

In fact, that was the challenge we faced: bringing together the largest possible number of our people in order to put democracy on track.

I will spare you the details of a long and difficult journey towards achieving these two objectives. Today, however, I think we can objectively say they have been largely achieved.

We are undeniably a Nation which, rallied around its institutions, has transformed its diversity into wealth largely thanks to the CPDM. Some of our comrades have decided to create other political parties. That is their right and it is totally respectable. They too are contributing to the proper functioning of the system.

We are also a democratic State with representative institutions resulting from free and transparent elections. The CPDM was the first political party to experiment pluralism.

In that connection, it could be said that the CPDM was the laboratory of democracy in Cameroon. Who today would dare say that Cameroonians have not assimilated the culture of democracy?

The CPDM can legitimately be satisfied with what has been accomplished.

The CPDM was forced by circumstances to inherit a special responsibility. Its militants must listen to the population among whom they live and channel the aspirations and grievances of ordinary citizens to party headquarters. As «soldiers of democracy», they are at the service of the people and not the reverse. Thus, it is with the trust of the citizens that the CPDM will remain faithful to its original purpose and continue to play its historic role.

To that end, it will require more and more women and men of conviction, since institutions can only be as good as those who run them.

The policy of these militants should be the satisfaction of the general interest. Within the party, they will need to streamline management, empower basic organs and control membership. The party should also open up more to new generations with new ideas and innovative proposals.

Cameroon is currently going through a delicate period of its history. Under pressure from Boko Haram at its northern borders and, at the same time, making huge efforts to revive its economic growth with a view to achieving the status of emerging country, the Government must be able to count on the undivided support of the entire population. It is receiving messages of support from all parts of the country and from all circles.

This process of rallying the vital forces of the Nation is another opportunity for the CPDM to contribute to expressing our national unity. I have no iota of doubt that it will be up to the task.

I wish you all a happy anniversary.