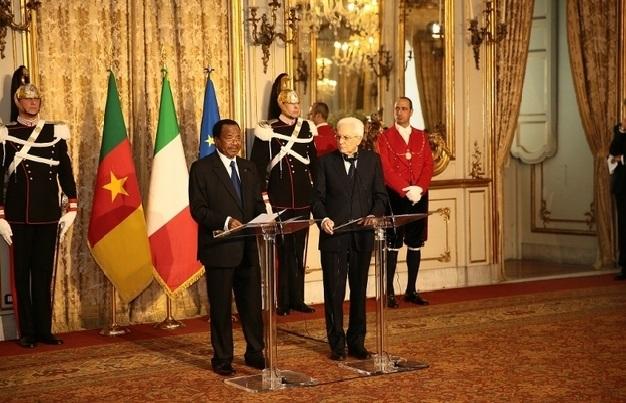 President Paul Biya and wife Chantal have concluded the 72hour state visit to Italy on the invitation of Sergio Matarella, during which cooperation ties were solidified.

Just a year after Sergio Matarella visited Cameroon, President Biya has returned the courtesy to strengthen political, economic and cultural relations between both countries. Heartily welcomed by his Italian counterpart, the reception reserved Paul Biya was telling of his stature as Africa’s leading statesman. According to the bilingual daily Cameroon Tribune, President Biya went from the Presidential Palace for the welcome ceremonies through the city council for the tribute to the grave of the Unknown Soldier and later met with the Council of Ministers and Senate and National Assembly Presidents.
Amongst things discussed by both heads of state on the second day of the visit featured the war against terrorism in Cameroon, the situation in the two Anglophone regions of the country, immigration and the role of the UN. The two delegations equally held working sessions during the occasion. In the sidelines of the visit, First Lady Chantal Biya took a guided tour of Quirinale Palace with Laura Mattarela, daughter of the Italian President. After discovering the rich cultural and artistic values of the Italian Republic, both ladies held an hour long one to one discussion. It is likely that the philanthropic Chantal Biya will not come back empty handed but will fill her bags for the needy back home.
Due to the absence of Cameroon among Italy’s priority countries of cooperation in recent years, the Italian-Cameroon cooperation in the development assistance area is experiencing a relative dynamism, particularly in the context of economic and financial crisis faced by European countries. However, the major news of this cooperation concerns the recent updating of financing mechanism on development such as debt cancellation to Italy. Indeed, the 2006 Agreement relating to the cancellation of an envelope of FCFA 99.3 billion included a 33% allocation ($ 32.7 billion) in projects to be agreed with the Italians. These augur a renewed interest in the country, and that would lead to the reinstatement of Cameroon among the priority countries for Italian cooperation policy in 2017.