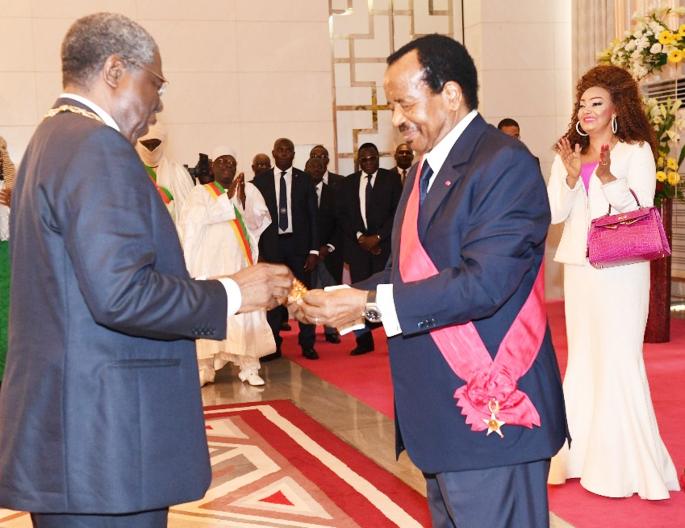 Cameroon’s newly sworn in president has promised to consolidate the achievements of his past mandate while exploring new opportunities to take the country to emergence.

Symbolically falling on the 36th anniversary of his accession to the Supreme Magistracy, Paul Biya pledged on his honour before God and men to devote his efforts to preserving, protecting and defending the Constitution and the laws of the Republic of Cameroon as well as defend the unity integrity and independence of the fatherland.

Tuesday November 6 2018 will go down history lane as Cameroonians witnessed yet another swearing in of President Paul Biya who won overwhelmingly by 71,28 percent during the October 7 presidential elections. The National Assembly, lieu par excellence for the oath taking was jam packed by men and women of all walks of life, who turned out to witness the historical event. The streets leading to the venue were lined by jubilant militants of the CPDM and onlookers, who had come to show love to the “man of the people”. Present were members of the Constitutional Council, Supreme Court, Parliament, diplomatic corps, government and other guests, all dressed in attires befitting the ceremony. Upon the arrival of the president elect, Hon. Cavaye Yeguie Djibril, Speaker of the National Assembly addressed those present beginning his speech in the English language as he expressed his joy at the fact that Cameroonians had renewed their confidence in Paul Biya. He saluted the maturity in which the elections and ensuing events were conducted while acknowledging that it was indicative of Cameroon’s effective democracy and the harmonious functioning of State institutions. Referring to the President as the “right man in the right place” he wished him Godspeed in his new functions while recalling all and sundry that Paul Biya was president of all Cameroonians.

As tradition would have it, after the reading of the short oath address by the Speaker, Paul Biya, hand outstretched pronounced the “I do so swear” amidst thunderous claps resonating in the hemicycle of the National Assembly. And so it has come to pass that Paul Biya will run the affairs of the country for the next seven years in a context marked by the persistent Anglophone situation and the gaping challenges to the emergence drive. Starting by thanking his fellow compatriots for renewing their confidence in him, he presented a rundown of the just ended mandate, remarking that it had not been a ride on jolly lane. Such impediments as insecurity caused by Boko Haram in the Far North Region and the upsurge of secessionist incursions in the North West and South West regions were mentioned. To the expectations of Cameroonians and more, Paul Biya reassured and pledged to ameliorate working conditions for all. He mentioned progress made in the economic sector, recognized the worries of the youths and promised to see into establishing favourable conditions for the country’s development to follow its due course. As one who has had keen interest in happenings in the Anglophone regions he called on the people not to lose hope but continue working with authorities in the bid to put an end to the troubles in the area.

Having received full attributes moments after the swearing in ceremony as Grand Cordon of the Order of Valour at the Unity Palace from Peter Mafany Musonge, Grand Chancellor of National orders in the presence of the constituted corps, Paul Biya now has the challenge of living up to expectations of the people. Meanwhile, Cameroonians were later treated to a banquet offered by the presidential couple at the Unity Palace.