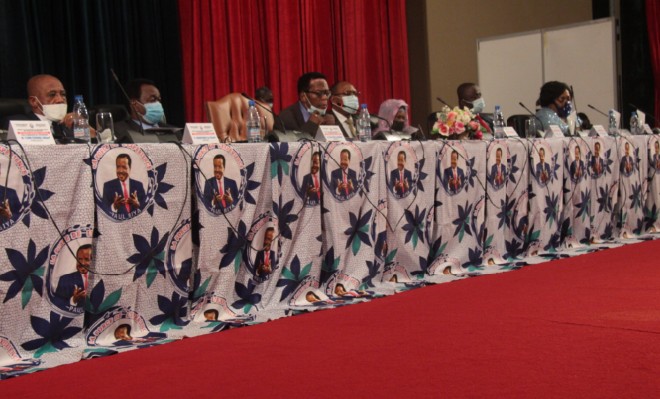 The SG of the Central Committee of the CPDM has beckoned those in charge of the exercise to prioritise inclusion, sharing and efficiency in the choice of executives.

The meeting that took place at the Yaounde Conference centre was in prelude to the launching of the exercise to renew the executives of basic organs of the CPDM and its specialised organisations at home and abroad.
In attendance were members of the Central Supervisory Committee, members of the Technical secretariat and its sub committees, members and personnel of the General Secretariat of the Central Committee, presidents and Chargés de missions of regional and divisional coordination and control committees. It was a forum to acquaint actors of the renewal exercise with handy information on its unfolding, which as earlier wished by the SG ought to portray the maturity of the Party.
Jean Nkuété in his opening remarks lauded outgoing executives for work well done, within a context marked by several upheavals and situations of national interest. Recalling that the update of the party’s cartography last March 2021 was in readiness for future challenges, he added that it was time for stakeholders to contribute their quota in organising elections that would make the CPDM emerge as a modern, mature and more resilient Party. He insisted that because the destiny of the party was linked to that of the country, it was imperative to remain vigilant for eventualities. He was cognisant of the daunting task awaiting the teams going to the field, reason why he cautioned them to work in reference to the directives contained in all related texts in a bid for the exercise to be a success.
On hand to dish out practical guidelines was Monkam Nitcheu Jean Fabien, Adviser at the General Secretariat, who in his down to earth manner served attendees with tips to help them on the field. The Coordinator of the CPDM academy Prof. Elvis Ngolle Ngolle talked about the context, stakes, challenges and strategies for the renewals in the conflict-hit regions of North West, South West and to some extent, the Far North. Prof. Celestin Ndembi Yembe added his voice to those of others to expatiate on the texts regulating the entire process.
The ball is now in the court of those called to assist militants on the field, to choose candidates worthy of the salt as hierarchy has provided them with the necessary tools to achieve nothing short of remarkable results. With the launching expected in the days ahead, the SG implored his comrades to merit the confidence bestowed on them to make the flames of the Party ever bright in order to light the way for all Cameroonians.