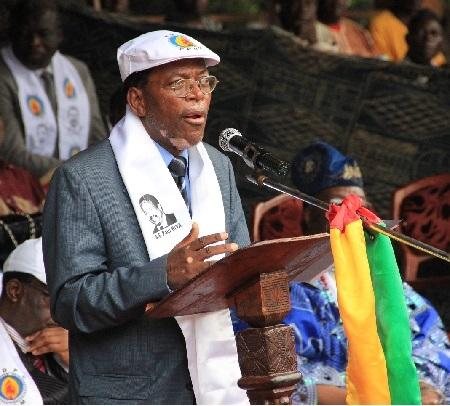 Theme:“Total mobilization behind the National President, Head of State, Commander-in-Chief of the Armed Forces, His   Excellency President Paul Biya, in the growth acceleration drive and the war against BOKO HARAM”

Dear Comrades,
The 31st Anniversary of the creation of the Cameroon People’s Democratic Movement which, as a tradition we celebrate on 24 March, falls this year 2016, within a unique context in terms of the functioning of both the State and the Party.

At the State level, worth noting is first and foremost, the all-out deployment of energies and resources for the achievement on schedule of the objectives of the three-year emergency plan, in line with the prescriptions. The Three-Year Emergency Plan, it should be recalled, is a strong initiative taken by the President of the Republic to raise the level of employability, energy supply, infrastructural, agricultural and industrial capacities of our country in a bid to attain economic Emergence, the ultimate goal being the sustainable improvement of the living conditions of the people.

The second aspect worth underscoring is progress in the war against Boko Haram, marked by resounding and recurrent successes by Cameroonian and international Defence Forces, which have led to the clear weakening and gradual dismantling of the terrorist group, in an asymmetric war which reveals daily, the patriotism and determination of our military compatriots at the war front, the commitment of all Cameroonians of good will behind the President of the Republic, Commander-in-Chief of the Armed Forces, and the active solidarity of our compatriots with the national Army.

The life of the Party, for its part, is marked by two major events: on the one hand, the upsurge in the Fresh Impetus instilled by the great success of the recent Basic Party Organ Renewal Operations which for the first time took place in general atmosphere of enthusiasm and through universal suffrage; on the other hand, the increasing fervor of militants who are relentlessly expressing their support and renewing their trust in His Excellency Paul BIYA, President of the Republic, in his stewardship of State affairs through numerous calls.
Such a combination of positive results and collective dynamism are obviously reassuring and augurs even brighter days for our country. We must stay on course and remain steadfast. That is why we have chosen the following theme for the commemoration of the 31st Anniversary of the Party:

“Total mobilization behind the National President, Head of State, Commander-in-Chief of the Armed Forces, His Excellency President Paul Biya, in the growth acceleration drive and the war against BOKO HARAM”
This theme points to two major issues:
Firstly, it reminds us of our duty to be vigilant at all times in order to provide our valiant Defence and Security Forces with the needed preventive and proactive intelligence, thwart the hideous scemes and plans to demoralize the people, pre-empt horrendous and barbaric acts, stifle ploys to destabilize, misinform and intoxicate the public. Hence there is a need to be on permanent alert both individually and collectively, revive Vigilante Committees and enhance cooperation with administrative and traditional authorities to secure our towns and villages, protect our national territory, and the free movement of persons and goods.

Secondly, to all CPDM militants, the theme is a call to renew their commitment and to work even harder in accomplishing the National New Deal understood as a permanent drive towards modernization and progress. That is why we should more than ever before rally behind President Paul BIYA, not only in the war against the forces of terror and barbarism, but above all, in the grand and lofty struggle for Cameroon’s progress and Emergence.

To that end, the numerous ongoing infrastructure projects nationwide, and the various agricultural and mining development programmes provide our youth with so many employment opportunities. Is this not ample proof that, under the stewardship of President Paul BIYA, Cameroon’s morale remains high and its focus is on development and improvement of people’s quality of life, despite the war?
The 31st Anniversary of the Party being the first major event taking place under the newly elected Basic Organ Executives, I take this solemn opportunity to once again extend to you the warm congratulations and words of encouragement of the National President, without forgetting those of the General Secretariat of the Central Committee as well as mine. Pending the Secretary-General’s visit, I reiterate my directives relating to the effective assumption of duty by newly elected officials, notably Presidents of Section Executives who should, without delay ensure, as a matter of priority, that CPDM militants, friends, sympathizers, and voters are registered on electoral rolls.
I urge militants everywhere to close ranks in celebrating the Party’s Anniversary in peace, harmony and communion, in the new unison and cohesion following the elections. Like last year, the Anniversary should be celebrated in dignity and sobriety, while sparing a thought for and supporting our Defence and Security Forces, and in solidarity with victims of the atrocities.

Everywhere nationwide, the Section is the Unit of celebration of the Party’s 31st Anniversary. Under the supervision of Regional Permanent Heads of Delegation of the Central Committee, the event is to be organized by the CPDM Section Executive President, in synergy with the WCPDM and YCPDM Section Executive Presidents, with the support, cooperation and assistance of comrades who are Members of Government, leading militants, nationally and locally elected and senior Party officials who are hereby invited to effectively contribute and actively and massively participate in the festivities of their political unit to give the celebration the desired pomp.

It is my fervent wish that individually and collectively, the 31st Anniversary should be for us a fresh opportunity to strongly reaffirm and express our oath of loyalty and commitment to the Party and its illustrious Leader, His Excellency Paul BIYA who incarnates the hopes of the Cameroon People’s Democratic Movement and the overwhelming majority of Cameroonians of good will.

I know I can count on your high sense of responsibility to give the event the importance it deserves and contribute at best to its success.
Dear Comrades, accept once again, my warmest regards.
Happy Anniversary to each and every one!