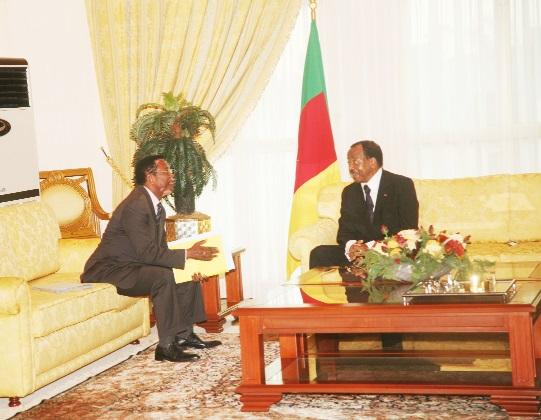 The Secretary General of the Central committee of the CPDM Jean Nkuété was sat down with National President and Head of State Paul Biya .

Amongst the audiences granted by President Biya was a rare one, that of Jean Nkuété, Secretary General of the Central committee of the CPDM. File in hand, Jean Nkuété conversed with the National President of the ruling party. They perused the file the SG handed to the national President. Otherwise, the President could have invited the SG at the presidency after his arrival but the President chose to receive him immediately. It shows the importance on the issue they talked about. Also, the two top brass of the CPDM might have discussed on the future configuration and activities of the party. This happened at a time militants nationwide and abroad are insistently calling on Biya to present his candidacy for the upcoming presidential election. Moreover, the March session of parliament is underway and the biggest issue on the tables is the election of the bureau in both houses. A day after the audience, CPDM parliamentary groups met in a working session chaired by the Secretary General, during which the party’s candidates were picked. These choices could have been decided during the tête-à-tête.

Meanwhile, the normal scenario on the return of the President and wife was repeated. The festive mood at the Nsimalen International airport was marked by the drum beats and dancing CPDM militants and other well-wishers who turned out in large numbers to greet the Presidential Couple. Like always the militants of the Mefou and Afamba South section from the three wings of the party mustered strong to welcome home their champion after his sojourn. Their enthusiasm attested to the undying support to their national President whom they have been clamouring to present his candidacy for the presidential election in 2018.

Earlier, present at the foot of the plane were the eldest members of parliament, Chief Nfon Victor Mukete of the Senate and Honourable Enow Tanjong of the National Assembly. Prime Minister Philemon Yang as well as the Secretary General at the Presidency of the Republic amongst other dignitaries were there to welcome the Presidential couple.