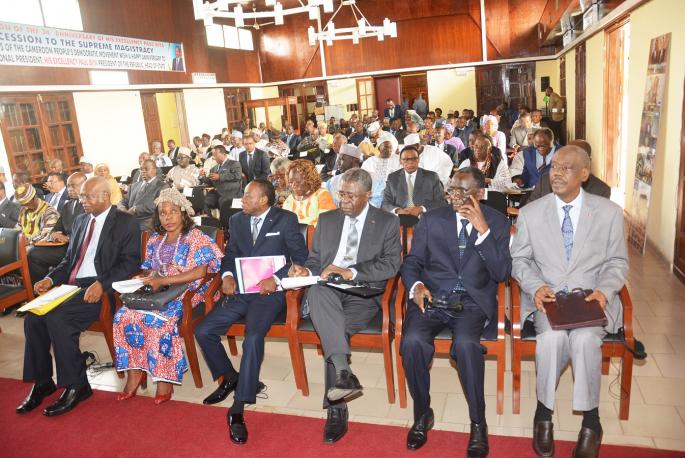 CPDM should be the Sentinel

Members of the Regional and divisional delegations of the Central Committee of the CPDM have been enlightened on their role as sentries in preserving national integration.

In the wake of violent clashes witnessed recently in the North West and South West Regions of the country, the top notch of the party have been sensitized on the importance of preserving peace through adequate intelligence gathering.  In two separate exposes the Delegate General of National Security Martin Mbarga Nguélé and the Minister Delegate at the Presidency of the Republic in charge of Defence Joseph Beti Assomo presented the security situation in the country, noting that the CPDM has its own role to play and which it has been doing so far.
The working session presided at by the Secretary General Jean Nkuété was used by Mbarga Nguélé to stress the need for vigilante committees to intensify their work on the ground because the security of Cameroonians cannot be traded for anything. To the delegates at the seminar, he explained that the use of the various mass media and even the social media for the preservation of peace should not be undermined. Noting that the enemy uses every means possible to attain his objective, he stressed that so too must those who intend to safeguard the security of the people work relentlessly using every canal possible. The increase of awareness campaigns on the fight against terrorism is of great importance not forgetting general mobilisation of all components of the society to feel concerned about happenings around them. The CPDM through its delegates must continue sensitizing militants to provide authorities with required intelligence in order to curb acts of terrorism.
Minister Beti Assomo on his part reminded attendees at the seminar that the nation, institutions and the territory are no go areas for lovers of terror. He elucidated the delegates on the arduous task of the defence forces all over the national territory especially in the Far North regions where the terrorist sect Boko Harram is causing havoc. He nonetheless saluted the contribution of the CPDM through its militants who have been providing important information to local and administrative authorities. Supporting the actions of the defence forces on the field through material and financial donations have been part and parcel of the CPDM and these gestures the Minister noted were of great importance to the output of the men at the front. Recalling the recent crisis in Bamenda, he was categorical that it was only in extreme situations that extreme measures were taken to safeguard the safety of persons. He beckoned on the regional and divisional delegates to carry the message to grass root militants to cultivate the spirit of belonging and work in collaboration with the authorities for peace and security to be preserved. Jean Nkuété reminded all that the CPDM has to be at the forefront in the fight and like a sentinel, preserve the peace and integrity of the nation.