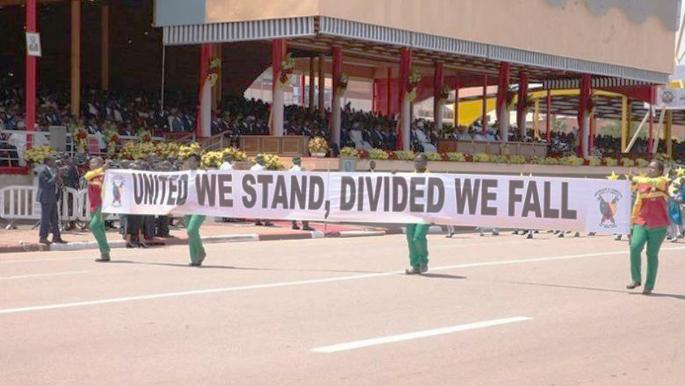 Despite the current socio-political crises in the Anglophone regions, Cameroonians hold that it takes a determined people to build a nation and remain unshaken in the face of adversities.

The slogan ‘Cameroon is one and indivisible’ has been resonating these past weeks, through messages and songs, serving as a reminder for the population to remain steadfast. Opinion holders say consolidating national unity is quite a challenge at a time when the country is presently being rocked by news of terrorist exactions in the English speaking regions. Reactions have been varied, from the disgruntled to the realistic; there is no doubt that both parties seek a common goal- a better life for all in peace and tranquility. And so for radicals to take up arms and terrorize villages all in the name of liberation is beyond outrageous as not only are innocent lives lost but the very tenets of humane behavior questioned.

To some, it would be meaningful if the crises were given serious thought and solutions sought without which efforts would be fruitless. As someone wanting anonymity said “we cannot be talking of consolidating national unity when the happenings in the Anglophone regions question this very concept. You will bear with me that if public authorities promptly provided answers to people’s worries, things would not be going down the drain as is the case now back home.” He holds that youths who are said to be the leaders of tomorrow should be allowed the arena to bring their contributions to nation building. Making each Cameroonian feel accepted wherever he finds himself is most important as the feeling of belonging matters.

It is true that government has not been lying on its laurels as the wellbeing of the population is topmost on its priority list. While diversity may create a feeling difference, its benefits if well harnessed could greatly influence the consolidation of the country’s oneness. Men, women and children ought to cultivate the spirit of tolerance amongst them because variance in opinions might be strength rather than a weakness depending on the angle from which it is viewed. While the quest for a more solidified Cameroon remains challenging, it’s a sure thing that it is achievable and Cameroonians need to all come on deck to see it happen.