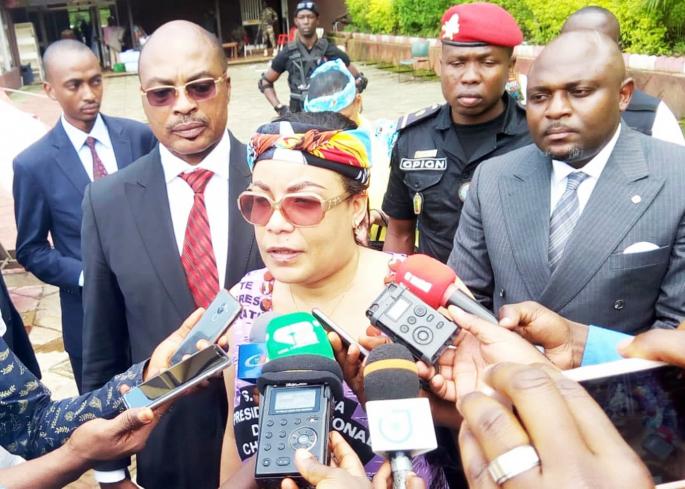 The daughter of former President Amadou Ahidjo addressed youths of all spheres at the hall of Ayaba Hotel on Wednesday September 26, 2018.

“Ours, it is the choice of wisdom, choice of experience, the choice of peace, the choice of social and economic development, choice of national unity. This choice in my eyes is just one person who incarnates it, and that is President Paul Biya”, the daughter of late Amadou Ahidjo said. Addressing about 300 youths comprising of Christians and Muslims dressed in the CPDM fabric at the inner chambers of the government owned hotel, Aminatou Ahidjo, assured them that their plight during a question and answer session will be channeled to President Biya. Describing candidate Paul Biya as her second dad after her biological father, she reiterated that the presidential elections of October 7 is an important moment that will determine the destiny of the Nation.

According to Aminatou Ahidjo, the population needs to vote and not give in to agitators, provocateurs, destroyers, and thieves who want to steal their votes. “Through this act, we need to show them our determination by standing on the side of the liberty of the Republic”. While admitting that there are specific problems in these two regions because of a significant historic pass, she acknowledged that those by teachers and lawyers were solved. She cried over lost and destroyed lives. “I salute here the memories of elements of our defence forces that have fallen with guns in their hands defending the nation. I salute also the memories of all those who have been brutally killed. In reality, this war affects the entire population of these Regions, victims of exactions, of kidnappings«, Aminatou Ahidjo re-echoed. She questioned the atrocities committed in the name of fighting for freedom. «Education is an inalienable human right according to the United nations children’s education fund (UNICEF). How then can one understand that those claiming to fight for the population in these two regions inflict them with this much suffering?”

Mme Aminatou argued that Paul Biya loves the North West. She said: Since then he (President Paul Biya) has not stopped showing his love, his attachment and even his generosity towards the North West notably the creation of the University of Bamenda with the Polytechnic, a Higher Teachers Training College, its Faculty of Medicine, the University Hospital Center of Bamenda under construction. The rehabilitation of the Babadjou-Bamenda roads in progress just like the construction of the Ring Road and Low Cost Housing.

Her two-day stay in the North West Regional headquarters Bamenda, took her to Fon Angwafor of Mankon and to Fon Azehfor III, where she was categorical that only President Paul Biya, can bring to an end the current socio-political brouhaha plaguing the English Speaking Regions of Cameroon.