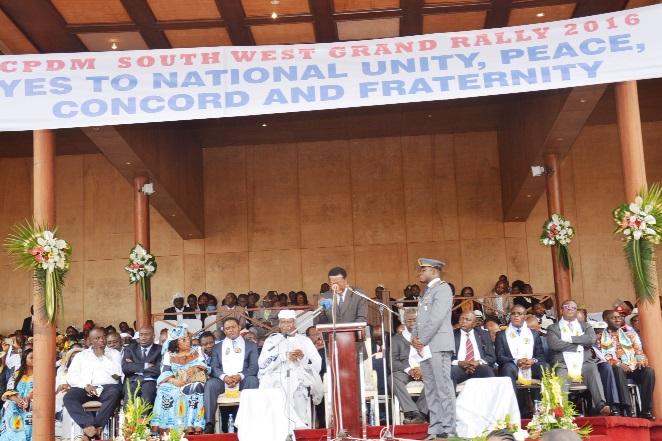 The Secretary General of the Central Committee Jean Nkuété made the call as he addressed militants and sympathizers of the CPDM Party in the South West Region at the heavily attended rally at Bongo Square in Buea, yesterday Tuesday December 6, 2016.

The scribe of the blazing touch Party headed a high power delegation of the Central Committee to Buea supported by the Prime Minister and Head of Government, also Head of the Permanent Regional Delegation of the Central Committee for North West Regional Philemon Yang, members of government of Anglophone extract, members of the Central Committee, parliamentarians, mayors, section presidents and administrative authorities. Jean Nkuété in his speech begged the population to exercise restraint and maintain peace. The mission of the Secretary General of the Central Committee was one of consolation. He heralded peace, unity and national integration as the drive to move Cameroon forward. Gathered at the reunification grand stand in Buea, the SG took off time to plead with the population to remain calm and patient as the Head of State and the government are already providing lasting solutions to problems affecting the region. To the SG, the party sympathized with the Anglophones, though their problems are not different from those of other regions.
As a show of national integration and unity, the dynamic youths of the region were seen carrying placards which bore different wordings as “South West condemns violence as a means of solving problems,” or  “Cameroon is a land of peace let’s preserve it,”  and “South West stands for one and indivisible Cameroon”
The event that pulled together all living forces of the South West Region and other parts of the nation was a moment of reflection on the significant efforts being put in place to bring the much needed development to the Region. It was also a moment of stock taking on the numerous giant projects in the domains of roads, education, health, sport infrastructures and others. The massive-turnout of CPDM militants and sympathisers from across the region was to receive and listen to their party officials who settled on the aspect of peace as the only valuable asset that has and will continue to be cherished in Cameroon. Violence, disorder and destruction of public properties were vehemently condemned as the saying goes: “he who wants development cannot be agent of destruction and he who destroys has never constructed.”
The representative of the youths in the South West pledged to galvanize the youths to uphold the principles and values of the CPDM which are those of unity, peace and national integration. Children were all urged to return to school so as to consolidate their position as future leaders of the nation.
Even the various dance groups all sang in unity, calling for peace and end of violence for the much-needed development to follow in the region.
The grand rally that had as theme ‘Yes to National Unity, Peace, Concord and Fraternity’ was an opportunity for the population of the Region to plead with the government for the construction of some of the roads; Tombel-Bangem Nguti, Bakebe-Fontem-Dschang,Wabane-Fontem and others. At the end of the successful outing of the SG and his entourage, a tight- worded motion of support was addressed to the Head of state and National President of the CPDM Party, Paul Biya.