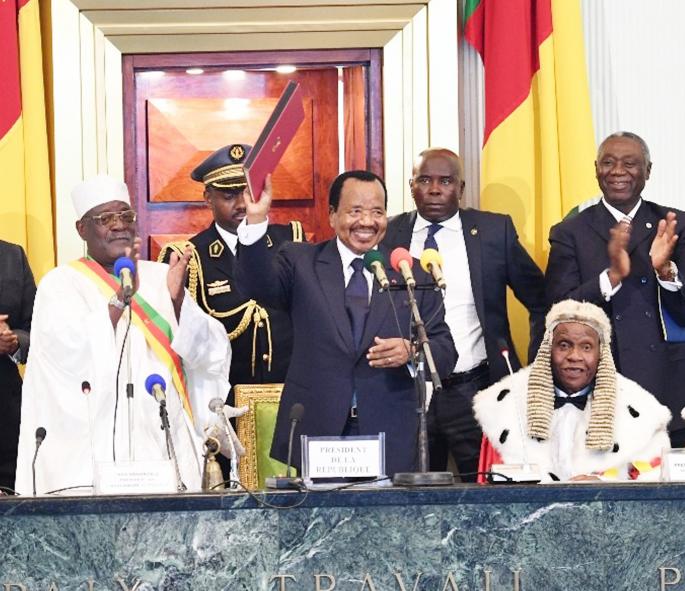 Like one of those rare occurrences in a lifetime, Paul Biya has again made history by swearing in for a new seven-year mandate on November 6 like he did 36 years back.

The now popular “I do so swear” had quite a resonance this November 6, 2018. The more so because it played out like in some mysterious movie where an uncommon happening recurred as if to signify something yet to be deciphered. Back in 1982, it was the first time Paul Biya chose the aforementioned phrase in English, which marked the beginning of his term of office. Call it providence, but it just so happened that once again, Paul Biya stood on the very ground of the National Assembly and swore in before the people, after having won the most highly contested elections of Cameroon’s history. It will be told for years to come that the “Man of November 6” as Paul Biya has now been fondly called had been preordained by the forces of nature that the day he takes oath of office falls on the same day like when he was handed power by Ahmadou Ahidjo, falling within the 15 days following the proclamation of the results by the Constitutional Council as stipulated in the Electoral Code.

It should be recalled that since coming to power in 1982, rigour and moralization which were the axis of New Deal principle have been the vision of society for the president elect. This policy of stringency in the management of public property and moralization of the society, underlined the basic concepts of the new society that emerged from November 1982. The vision then was one for a new way of living together. The “Modernizer” between 1982 and 1985, set his mind towards economic recovery and setting the pace for democracy. In 1985 he decided to introduce a political platform that could accompany his aspirations for Cameroon. That is how the CPDM was born in Bamenda to match those aspirations while the CNU died a natural death. As if to say he was seeing tomorrow, President Biya is reported to have told radio Monte Carlos in France that he would be remembered as the man who brought democracy to Cameroon.

As Cameroonians await that Paul Biya makes concrete the promises embedded in his campaign manifesto, expectations are high on the restoration of peace and security in the North West and South West regions, where the exactions of gunmen increase by the day. History Making Biya has today November 6, 2018 pledged to faithfully perform the duties entrusted to him by the people and just like in 1982 on the same date he will devote his efforts to preserving, protecting and watching over the commonwealth of the Nation.