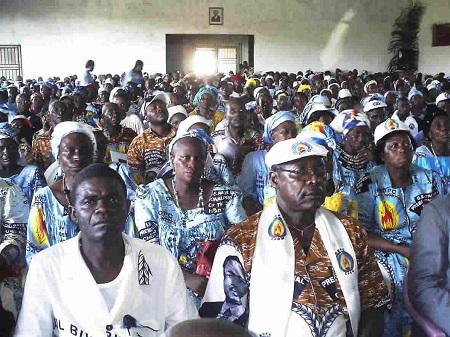 First, the circular says the candidate for the post of section president must meet the requirement on domicile, militancy, commitment, efficiency, competence, morality, patriotism, experience, seniority, civic responsibility and discipline as defined under the basic texts of the party.

On residence, the SG’s note adds a key statement: ‘dwelling located on the territory of the basic organ in accordance with the address declared by the candidate, where he lives or stays regularly.’ ‘Active or constant contribution to the party existence and local development; sound knowledge of the local environment,’ the SG adds.

In the same vein, a hopeful for the boss of the party at the section must in compliance with article 39 (1) of the By-laws not hold more than one post within the executives of the basic organ and specialized organs of the party. A section president aspirant cannot put his candidacy for another post wihin the section, sub section, branch or cell.
If the hopeful was reprimanded, suspended (even the concerned is still serving his punishment) or dismissed by the Musonge Ad Disciplinary Committee seating on the morrow of September 30, 2013 legislative elections, he is not eligible. The National President approved the decision of the committee on September 11, 2014. Therein the decision, 87 were militants sanctioned – 8 dismissed cases, 44 suspended militants and 35 queried of the 165 tried.

In addition to the above mentioned criteria, those who want to be section presidents of the main (CPDM), women or youth wings must have been part of the executive in a section. It includes President, secretary, treasurer, communication officer, economic and financial affairs officer, social and cultural affairs officer, specialized organisations officer, officer for lower organ activities, dispute officer, auditor and adviser. If at the sub section, the hopeful was a president, vice president, secretary or treasurer (not their assistants) he is qualified.
However, if the contender is a substantive or alternate member of the central committee, member of the WCPDM or YCPDM national executive is exempted from the criterion of must-have-held a post.
Likewise, full senators, MPs, mayors, militants of newly created sections abroad shall be led off from the above conditions. Therefore alternate senators and MPs as well as deputy mayors cannot benefit from this exemption.
Also, CPDM militants who are working in diplomatic and consular missions, enjoying the status or diplomats or related positions shall not be candidate are out off the race. Hierarchy was to prevent adventurers from taking the party hostage because of their social ranking.
Influence peddlers can forget pushing files of unqualified candidates in the name of compensation or newcomers joining the ranks of the party would have to rethink their decision if their aim was to penetrate the CPDM from the top.