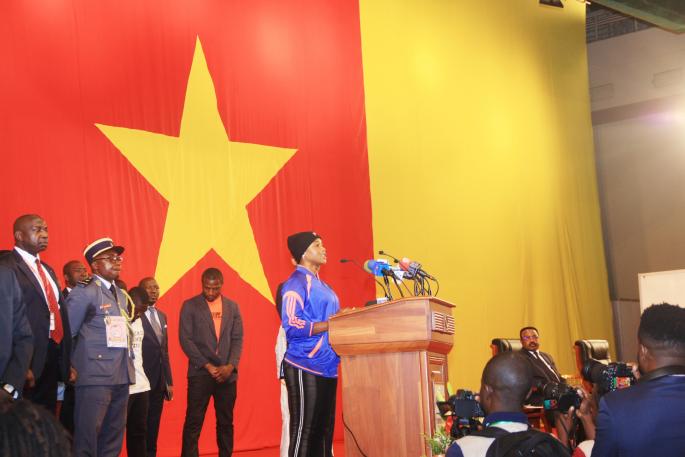 The surprise orator acknowledged having been manipulated into joining separatists with the false illusion that life would be better after a supposed separation.

There was no taboo when the young lady stepped forth just when the Prime Minister, Head of government Dion Ngute was about to make his inaugural address. Ladies first, was his reaction as he stepped aside, leaving the ex-combatant the leeway to express what was on her mind. She wore a look that spoke volumes. Addressing the hundreds who had gathered for the first day of the National dialogue, she revealed her disappointment at having been made to understand that after two months of joining the separatist fighters, she would be offered a job. Three years on, the reality hit hard that her aspirations to make it in the utopic country were grounded. As a prodigal daughter, she begged Cameroonians to forgive and accept her back into the fold. Like her, many had been misled, and were ready to come back home.
Earlier, the spokesperson of ex-combatants had taken to the rostrum, outlining their reasons for derailing. Kawa Kawa Yanick with the backing of his peers didn’t mince words when he poured out his heart, even drawing out rounds of applause. His bluntness was all the more welcome when he mentioned that feeling like a second class citizen in his very own country was no laughing matter. To him, the outcome of the dialogue would be determinant in making them convince others still in the bushes to lay down their arms and return to normal life.
As many ex-combatants continue knocking on the doors of reintegration centres in the two regions, government too is not relenting efforts in creating enabling conditions for those who have made a U-turn as well as accelerate a change of mentalities.

Major National Dialogue : The beginning of a success story